From Marching Band to Concert Band: The Secrets to Success in Transition 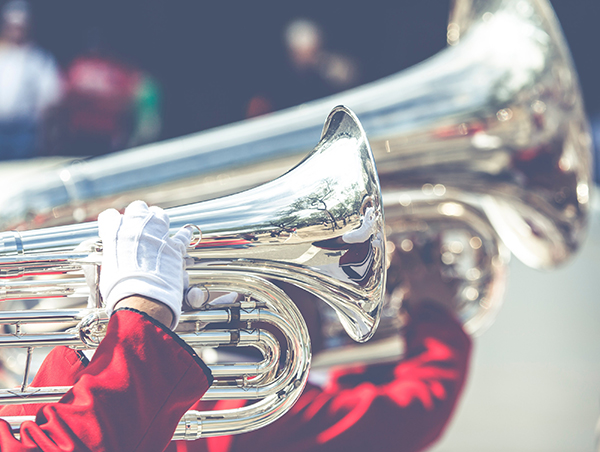 From the unsolicited blaring trumpet and the near reckless abandon of low brass splats, the seemingly limitless “nature” of the great outdoors invites instrumental sounds on the marching band field that we should not aspire to in the concert hall. Truth be told, many of us are guilty of not only looking the other way, but also “listening the other way” when hearing these melodic anomalies. After all, these sounds, beloved by band fans and directors alike, are the loud and proud sounds of the fall, an audible slice of outdoor Americana filling stadiums throughout the country.

When the stadium lights dim for the final time and we transition indoors, the most important thing to remember is, it’s all about tone! Early in the transition, it’s important to prioritize chorales with legato tonguing and tuning. Reminders to “tone it down” and use softer dynamics will be many. Tonguing, tuning, and dynamics take on new meaning and should be an early focus. Also, it can be a hard concept to process, but remind students that it takes more air and more focus to play soft.

In an effort to encourage students to listen to the musicians on either side of them, I share a brief anecdote: “Although you’re the same physical person when you’re with your best friend and when you’re with your grandma, you definitely act like a different person. So, when you’re playing inside, it’s best if you imagine your grandma saying something like she’s glad you aren’t ‘carrying on so much.’” Add your own detail—this tale “hits home” for young and old alike.

Give extra attention to students realizing additional challenges to the new environment: Double reeds and horn players have been playing different or secondary instruments and likely haven’t played their primary instrument much, if at all, during the time-consuming marching band season. Also, percussion players need to rotate and work on all the different colors, now that they aren’t tied to one instrument.

There is a great benefit, specifically at this time, to encourage private lessons and chamber groups. If they aren’t currently doing so, I strongly encourage all band programs to prepare and perform a December concert. After all, the concert band is the heart of any successful band program. December concerts are very motivating.

GREGORY SNYDER is founder and conductor of the Nashville Youth Wind Ensemble (BelmontAcademy.net/NYWE). He mentors band directors and holds clinics for band programs in Nashville and across the U.S. Mr. Snyder is an adjunct professor for Bowling Green State University and Belmont University. He is director of bands emeritus, Lakota West High School, West Chester, Ohio, and an elected member of the prestigious American Bandmasters Association. For more information, go to GregSnyderBand.com. Greg is an education clinician for the KHS America Academic Alliance.