Getting Students To Play Gigs Off Campus 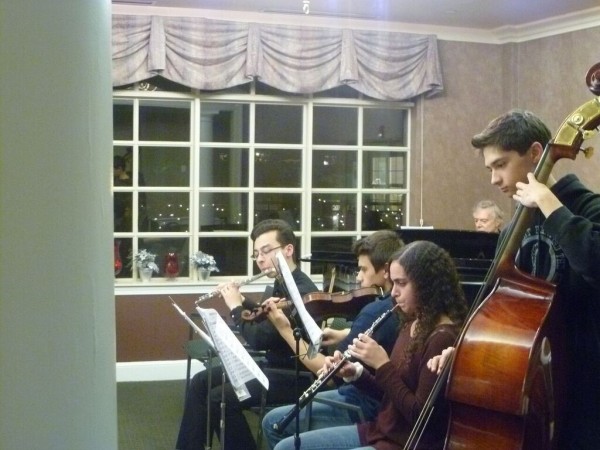 Does anyone go into the field of music performance for the money? It’s not like someone says, “I want to make a lot of money. I think I’ll be a musician.”  Musicians play music because they love to play and they love to play to an audience.

I come from a musical family. My father played in polka bands with his brother and their father and that pattern of a father and two sons goes back 6 generations to the 1800s in Poland. My dad was a club date drummer on the weekends, but was a food broker for supermarket products during the day. He came up with the idea of having my brother and me play jazz standards at the entrance of the supermarket he had displays in so that the customers saw the ad for his product on my brother’s bass drum and my music stand. The shoppers thought it was cute to see these two little boys playing old songs and would go check out the product we were advertising.

When I was in college at Mannes in New York City in the 1970s, I would spend spring and summer weekends playing duets and trios in Central Park, in front of museums and at subway entrances as street musicians, often reaping money for food shopping, etc. I also made a hit in Paris when I spent a summer abroad studying and entering international music competitions. I’d park myself on the Left Bank of Le Seine River across the water from Notre Dame Cathedral. None of the Parisians could understand a word I spoke in French, but they applauded and threw coins and currency into my case when they heard my Mozart and Brahms.

Fast forward to getting my teaching job in a high school in a Long Island suburb. Most schools have a winter concert and a spring concert and not much more. Yes, there’s the football season and marching in the Memorial Day Parade. But I saw so many more opportunities. The most obvious was the local nursing homes and assisted living institutions. All these places had a grand piano in the lobby for the residents who knew how to play. In my first year teaching at this particular high school, I brought a few students to those places to play chamber music and jazz tunes for the residents during their dinner hour. They loved us so much that they keep inviting us back every year. When I first started this, I was close in age to my students. Now in my 25th year doing it, I am so close in age to the residents that the managers of the homes are offering me a discount to move in.

One thing about playing for the elderly is that these distinguished individuals crave for engaging conversation with young people. Before and after we play our little concert of classical and pop music, I send the students into the audience to start conversations. At first, the students don’t know how to start a conversation, but once they say, “Hi, my name is Zachary…..,” the older persons ignite the conversation by asking questions and then talking about their grandchildren or what they did before retiring.

When my own son was a student at LaGuardia High School in New York City, he started a brass band called “The Lucky Chops” and played live Dixieland music at the school’s main entrance every Friday morning. I borrowed his idea to start our own “Lobby Music” on Fridays three years ago. The students who play look forward to it, as well as the students, teachers and staff who enter the building on Friday mornings. Once when we had a special day of exams on a Friday, I decided to hold Lobby Music on Thursday. Everyone entering the building became confused. When the secretaries found out that we wouldn’t have Lobby Music the next day, they threatened to call in sick.

Recently, we began to play for the patients at our local Children’s Hospital (Cohen’s Children Hospital at Long Island Jewish Medical Center). At first, I wasn’t’ sure that my students could handle seeing sick children their own age–and younger. But I was so impressed by how they showed their strength by going up to the patients and engaging in conversation with them before and after we played our little concert of classical and pop music. It brought me to tears to see how happy my students made these sick children.

We are starting to realize that music performance isn’t just a stage of musicians in tuxedos and gowns playing to a sit down audience with programs in their hands. Music performance is much more than that. It can be in a park or a bank or a hospital room. And it can be just as powerful when the chorus is rehearsing in class during the school day and a visitor parks her car in the lot behind the chorus room and the occupant gets out of the car and just stands there listening and forgetting why she drove to this school.

Getting students to play gigs off campus is not about the money. It’s about connecting to people in a very special way.

JOSEPH RUTKOWSKI has taught band and orchestra classes at the John L. Miller-Great Neck North High School on Long Island since 1991 and was the orchestra director at Stuyvesant High School in NYC for the eight years prior. He continues to perform as a concert clarinetist in orchestras and chamber ensembles, as well as a jazz pianist with his sons and former students. Joseph is a two-time Presidential Scholar Teacher, a Distinguished Teacher of the Harvard Club of Long Island, and a two-time GRAMMY Music Educator AwardTM Quarterfinalist.