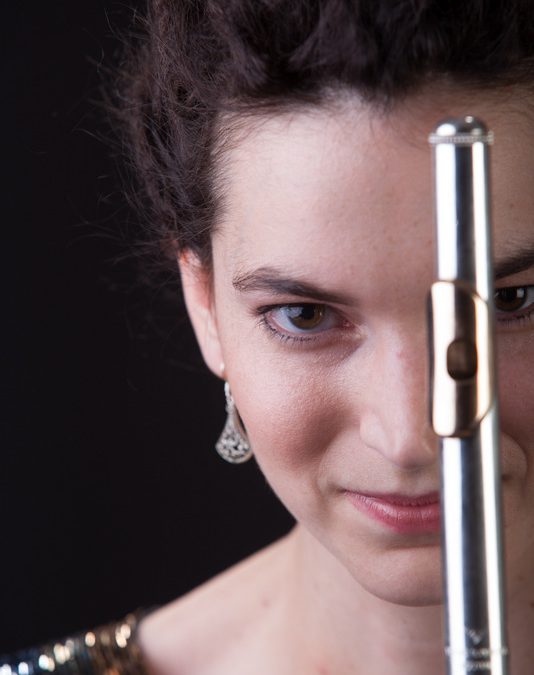 As I sat on the floor, surrounded by an amp, microphones, and stomp boxes, I held my flute and looked at the bewildering tangle of wires that would allow my acoustic flute sound to become a processed sound. I had seen this vision months earlier. This will be a dynamic way of playing the flute that combines popular music with classical music: the “electric flute.” I found a way to play the flute with the same electronic equipment used by rock guitarists. After months of research and experimentation, I found a setup that would accommodate the “electric flute.”

I played one note. In that one amplified, distorted, and digitally-delayed note I heard all the infinite, magnificent possibilities of the electric flute. There are no method books or published music for this configuration, so I realized I would need to create my own repertoire. I formed a duo called SONYQ (from the word sonic, which means “sound”) with an electric guitarist, composed some pieces, and recorded our first album, sänik. This album draws inspiration from classical flute, rock and roll, and free jazz. Prior to this, I had never improvised or composed a note in my life – but I knew I had finally found the secret to a fulfilling musical career.

I was raised in a musical household, and do not remember a time when I could not read music. It was not uncommon to hear my mother playing Beethoven on the piano on Saturday mornings to awaken my sister and me, and we were always singing. My father was not so musically gifted, but was incredibly supportive in all of my endeavors, whether it was astronomy, poetry, French, or sketching. In high school, I was incredibly shy, and nearly majored in physics before shocking my family with a decision to pursue music professionally.

My personal life has strongly impacted my artistic vision. Several years ago, my father was diagnosed with Lou Gehrig ’s Disease, a fatal and incurable form of muscular dystrophy. Watching his graceful but agonizing struggle with the illness illustrated poignantly the fragility of life, and has forced me to refocus my lens not just on life, but on Art. Art should be a synthesis of all of a musician’s abilities, not merely a re-creation of someone else’s art. It is the honor and responsibility of the artist to imagine and innovate!

I continue to forge ahead with SONYQ and the electric flute – writing even more music, building a fan base, and finding like-minded musicians to collaborate with! Look out, world: we are coming for you!

Happy musicking to everyone – and never stop pursuing your visions!

The Reasoning Behind a Decision to Major in Music