My Journey Toward Becoming a Music Educator – Scott Abrahamson 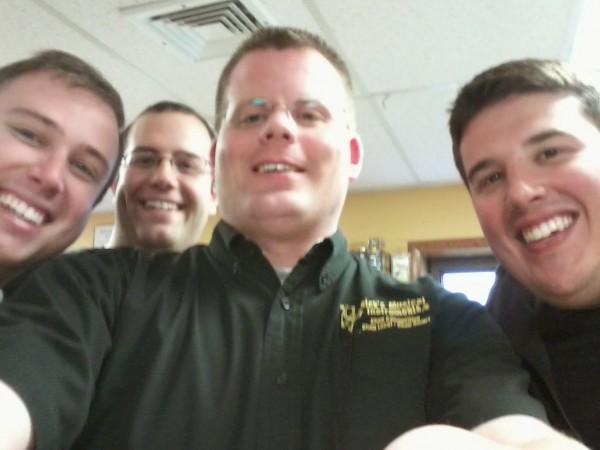 Lester G. Silva, Jr. He was the premier band director at Dorothy L. Beckwith Middle School remaining with the school district until his retirement 39 years later. What a wonderful man! He possessed a wonderfully kind, friendly and inviting personality, demonstrated great patience, and brought great enthusiasm to the classroom. He made learning about music fun, and was the kind of teacher you could talk to about anything. His classroom was always a safe zone, and he always encouraged us to do our best.

Mr. Silva was a very important figure not only to me, but also to my older brother before me who was also a trumpet player. Our relationship with Mr. Silva became one of those very special ones whereas he was a bit like a second father. When it came to music, he was our mentor and inspiration. Both of us earned music degrees in college, but it was ultimately I who pursued a career in music education.

My decision was not immediately apparent. That is until one night in my junior year of high school. I was just shy of earning my driver’s license, so my father was still dropping me off and picking me up from late night lessons with my private trumpet instructor. On this particular night, midwinter with extreme cold and snow on the ground, I came out to my father’s car, a 1989 Buick LeSabre, super excited about what I had learned and how well I had played.

“Dad, I love music,” I said. “I can’t imagine not doing music every day. But college is coming and I have to make decisions about what I will do for a living one day.”

“Do you want to perform?” asked Dad.

“Of course I do! But I think a life of performance only can be difficult. I don’t know that I want to be that starving musician, and it certainly doesn’t help if I have a family.”

“True,” said my father, “but couldn’t you perform while doing something else? What is important to you in choosing a career?”

“Well, I really want to make a difference – I want to help people,” I said.

“Of course! You know that, Dad.” (I have always loved kids, and was already teaching Sunday School as a high school student.)

“So what about Mr. Silva?” my father wisely asked.

It then dawned on me, as if the heavens were opening before me with life’s answers in front of me. Living a life of music, helping children discover the joys of music as Mr. Silva did for me. I would become a music educator!

When his wife retired, Mr. Silva moved to Florida. Before then, we met regularly for breakfast or lunch. He will always be an inspiration to me. In his normal modest way, he would tell me how honored he was to have a student who followed his footsteps, and that I too would someday have a student follow me.

I left the classroom two years ago for my current position. I still teach trumpet in my private studio, and use my position to affect positive experiences in classrooms. I still struggle with that decision, and for a time wondered if I had made a difference as Mr. Silva did for me. It is not for reasons of boasting, but for reasons of true and genuine pride that I share news that at least 7 former students chose careers in music, naming me as their influence and mentor.

Just a few nights ago, I was on the phone with one of them, now a middle school band director. He was telling me of his winter concert date, wondering if I could attend it, but also telling me that it made him nervous to think that I would. When I asked why, he said that I still held me in high regard, and, as his mentor, would be worried about what I thought. At that moment, I transcended into Mr. Silva. I told him that he had surpassed my wildest expectations, was accomplished in his own right, and would someday be in my position with a former student who looked to him as a mentor. “I paid it forward for Mr. Silva,” I said, “so you pay it forward for your students.”

I still have inner conflict about leaving the classroom. As I have a family, it was necessary for reasons not pertinent to this recounting. I am at least grateful that I still work in music and am able to make a positive difference through my work in music education each day. I am very much enjoying a new chapter in my life as a member of the music industry. What I can share most honestly is that I would not trade one moment of my teaching career for any reason!

I close this #GETBANDED story with my first ever “selfie” taken in September of 2014. Pictured with me are, from left to right:

I had the sincerest pleasure of teaching each of these men in school when they were just boys. They are the future “Mr. Silvas.”