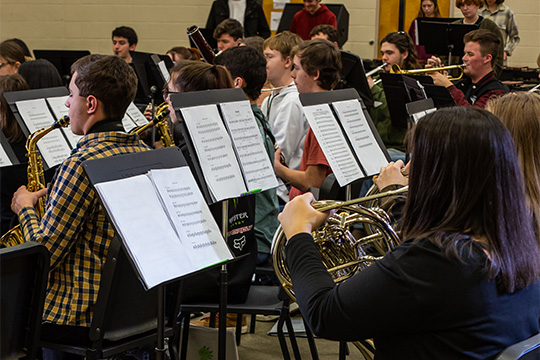 In my previous blog, I wrote about my concern that when ensemble students are told to correct their blend, they almost always just get softer so as to guard against the possibility that it is their sound that is causing the problem. Instead of first checking to make certain the quality of their tone is not the problem, they back off their volume. With all of them doing that, the overall volume of the ensemble is diminished, limiting the dynamic range the ensemble can perform with good blend.

Similarly, I hear groups who are working toward performing with good ensemble balance, who end up reducing their overall dynamic level as they try to achieve that balanced sound. All too often, when our ensemble is playing a chord at a forte volume, and we point out that it is unbalanced, the soprano parts get dramatically softer, the alto parts get somewhat softer, the tenor parts get a bit louder, and the bass parts get fractionally louder. The result: our unbalanced forte chord now becomes a balanced mezzo piano chord. In some cases, a lack of tenor and bass instrument players contributes greatly to this problem, but it seems just as much to be caused by inertia. Think about it. It is physically so much easier for those performing on soprano instruments to sustain a soft sound than it is for those playing bass instruments to sustain a loud sound. It basically comes down to that! The answer is to guard against that happening by gently insisting that our ensembles work toward mastering a beautifully balanced sound at all dynamic levels.