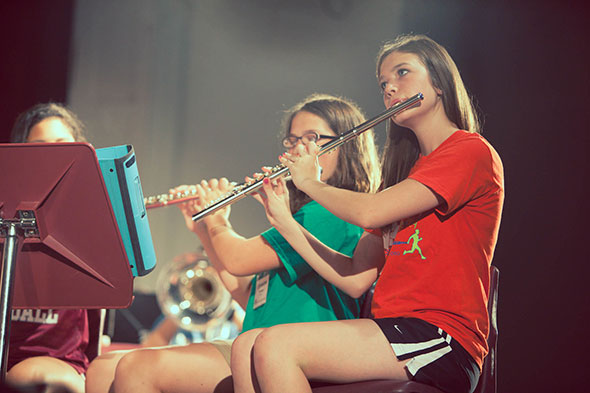 One of the first things I do when first rehearsing with a new ensemble is to ask them to raise their stands up, often almost as high as they will go. I tell them that all I want to see are their eyes peering at me just over the top of the stand. For many this may seem odd. For me, it is a requirement. Why? First, when students have their stands low, the effort required to look up at me is much greater, so they will do it less often. But with the stand higher, far less effort is needed to look up, so they will be more prone to pop their eyes up over the stand and look at me. Second, every time a student hunches or bends forward to look at music on a low stand, they also often contort their necks, heads, arms, lungs and instruments when they do. That will often (how’s that for an understatement!) change their posture and playing position which changes their tone, intonation, ability to breathe and embouchure. Sadly, the more times they look at us, the worse those factors can get! Just picture 10 flutes all unwittingly “rolling” their embouchures up and down as each of them bend their body and head up and down, going from looking at music on a low stand to the conductor looming above the stand. Now picture those same flutes – stands way up high – not moving anything but their fingers as they look up from their music to their conductor with ease. And with bells of directional instruments like trombones and trumpets, the difference is shockingly vivid. Try it. You will be amazed at the difference it will make.