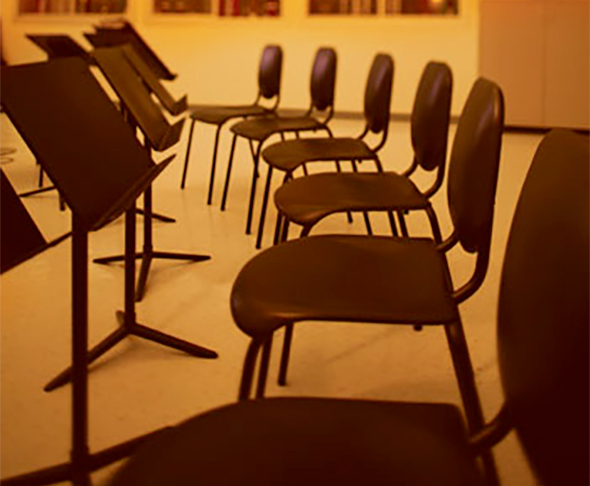 Though the life-lesson we all learned as children that states that “sharing is caring” is sage wisdom and a great message for most of life, when it comes to sharing stands in band rehearsals, nothing could be less true. I am a firm believer that players should not share stands. To explain why, let’s imagine two flute players at the end of the row on our right as we face the ensemble. The player on the inside has a perfect situation. He is set up for success: from his vantage-point there is basically a straight line from his eyes to his instrument, to his music – and just over the top of the stand – his conductor. Now, let us examine his stand partner, the person on the outside, sitting on the end of the row. He is put in an untenable, almost impossible situation: from where he sits he must look to his right to create that same straight-line view from his eyes, to his instrument to his music. But by having to share a stand, his conductor is close to a 45-degree angle to that player’s left. So, unless you install some pretty crazy mirrors in your band room, they really can’t watch you. Or at the very least can’t do it easily with good posture and position. The remedy is simple. If every player has their own stand they are ensured to have that ideal straight-line view. Though this problem is far less severe for players in the center of the ensemble, for players on the sides of the band it can be extremely detrimental. I know for advanced string players we have to share stands to facilitate page turning, but for young string players I still advocate not sharing since rarely, if ever at that stage, will they need to turn pages. So I would rather reinforce good “watching” and playing position in those early stages of development. And not sharing stands can go a long way to help that happen. Sharing a pizza: anytime! Sharing a cab: wonderful idea! Sharing a park bench: fabulous! Sharing a stand: nope!