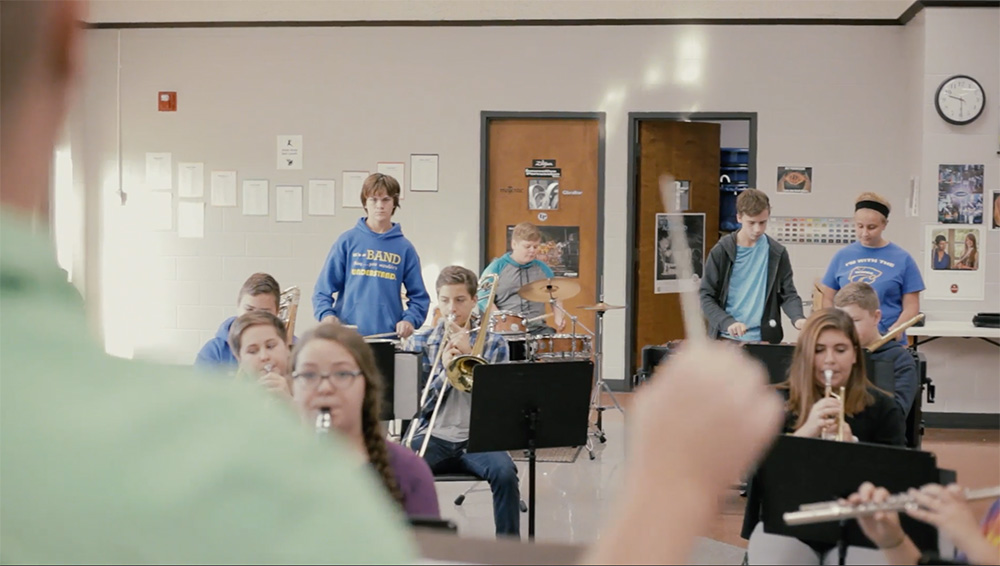 Nonverbal Signals.  At your next rehearsal, try using a nonverbal signal to represent something you want students to do, or not to do.  Then, for the first few times you use it, say what you want as you use the signal.  After that, only use the signal.  I am convinced that most of what I say in rehearsals can be replaced with nonverbal cues that save time, and often, everyone’s spirits.

Guided Listening.  If I had a dollar for every time I instructed an ensemble to “listen” in a rehearsal, I would be writing this blog on my private island in the Caribbean!  Sadly, most of those times were the equivalent of asking the extremely bald band director who wrote this article to grow hair.  A great concept, but not the least bit helpful.  However, by simply adding specifics of what to listen for to those instructions, everything changes.  Now they have something to guide their listening.  Something like: “Trumpets and alto saxes, listen to each other because you have the same part.” “Bells, listen to the flutes.  You are playing the first note of each measure of their melodic line.”  “Trombones, can you hear the tubas?  If not, you may be playing too loudly.”  Any help at all is better than my silly request just to “listen.”  Maybe I could have broken that habit earlier if I had simply trained my students to yell “listen to what?” when I said it!

Five Words Or Less.  So often I catch myself talking way too much in rehearsals.  Sometimes it’s necessary, but far too often I’ll babble on and on when a few succinct words would have been far more effective and efficient.  So, try using only five words or less whenever possible.  I think we can all agree, “Trumpets, measure sixteen, more accented,” works much better and saves so much more time than a lengthy soliloquy that students will tune out anyway.  It’s challenging to do, but five words are often more than we need!

Silence Can Be Best.  Silent rehearsals may be one of the most remarkably effective rehearsal tools I know.  Nothing I know works better to focus an ensemble than posting the order of what will be played on the board, then just start conducting without so much as a word.  Rehearsing with a conductor who is silent sets the tone and expectation of intense concentration and creates an atmosphere of deafening quiet that students are unlikely to breach as they concentrate on every facet of the communication we give from our face and hands.

Tips to Help Stay Healthy (Even In Flu Season)